Discover the most ancient Royal Residence of all Europe

EVERY DAY at 1 PM

Discover everything and more, about one of Palermo's most representative buildings of unchanged charm and inestimable cultural value. With this exclusive visit you will have access to the Norman Palace and the Palatine Chapel, symbols of the power and wealth of the Norman kingdom that have left their mark on the island's history.

Palermo boasts an enviable multi-millennial history and this is evidenced by the numerous churches, squares, monuments and palaces from different eras scattered throughout the urban fabric. Among the most remarkable historical buildings is surely the Palazzo dei Normanni with the attached Palatine Chapel, no less than the oldest royal residence in Europe. With this exclusive tour you can visit them while listening to their history and origins from the voice of an accredited, experienced and local guide.

Palazzo dei Normanni or the Royal Palace, as it is otherwise known, is a symbolic monument to the prosperity, political power and culture of the Norman Kingdom. A UNESCO World Heritage Site, the complex was built around the 10th century and is the oldest royal residence built in Europe and currently serves the important function as the seat of the Sicilian Regional Assembly, the Sicilian Parliament. The ensemble of buildings includes very different environments, many of which date back to different historical periods: the foundations of the Palace, for example, show layers of fortified settlements of Phoenician origin, with evidence of Greek-Roman, Byzantine, Arab and clearly Norman remains. Stop along the way to admire the details and take photos to share with friends and family back home. The ensemble of buildings creates, intertwined with the Palatine Chapel, two beautiful inner courtyards with gardens. You will then continue your visit inside the palace where the rooms are spread on two levels. The entire palace, the rooms and the furnishings are a representation of human skills and local craftsmanship. It is the best known building in Palermo and a true treasure chest of inestimable value. The Normans transformed it over time into the nerve center of the monarchy and built four towers connected by porticoes and gardens. Its magnificence symbolized the economic, military and political power of the kingdom.

You will then go up to the first floor where you will have access to the Palatine Chapel, with its 12th century mosaics of the highest quality and a beautifully painted wooden ceiling. The beauty of the place will leave you speechless. The chapel, founded in 1132 by Ruggero II, is undoubtedly one of Europe's greatest masterpieces. In fact, it was described as 'the most beautiful that exists in the world, the most stupendous religious jewel dreamt up by human thought and executed by the hands of an artist' by none other than the famous French playwright and poet Guy de Maupassant. After his coronation in 1130, Ruggero II ordered the construction of the Chapel. It was to represent both architecturally and decoratively the meeting of different cultures and religions, as Byzantine, Islamic and Latin craftsmen were involved in its realization. The place was consecrated for the first time in April 1140, as a private chapel commissioned by Ruggero II, and still holds many treasures. What impresses and fascinates thousands of travelers the most each year are the Byzantine mosaics depicting religious scenes from the gospel and considered by many to be among the most important mosaics in the entire country. Also noteworthy are the imposing royal throne and the beautiful wooden ceiling with the muqarnas, corner niches of Arab tradition. It is an extraordinary example of religious, cultural and artistic integration.

Please note: Palazzo dei Normani is a government venue. In case of official events or meeting the tour could be subject to cancellation.

This tour runs rain or shine. 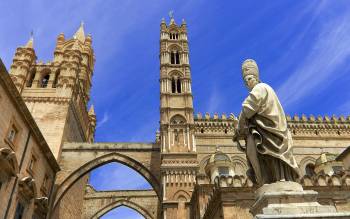 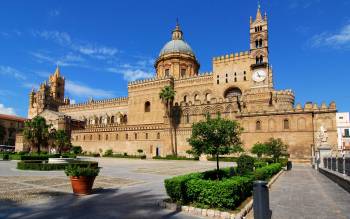 Palermo bike tour in small group with stop for granita

An innovative and unusual way to discover the Sicilian town center